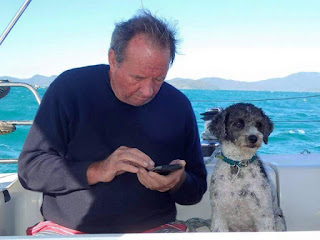 Well this wasn't in the brochure. Last year's sailing season started with promise and ended with a bang. On the 25th of August to be precise. A bang to the head to be even more precise but a bang nonetheless. Now that episode was actually a learning experience. Finding myself alone and a long way from home, the first thing I learned was how to handle a 44ft yacht solo. Daunting is a good way to describe that. Once the boat is in motion life is not so hard but maneuvering it, anchoring it,  trying to bring it alongside takes nerve, skill and organisation. It could be argued that I possess one of those traits, (of course it could be argued I don't possess any) but one out of three isn’t going to cut it. Anyway, a few days after the BOTH (bang on the head) I got up before dawn to  say goodbye to close friends who had travelled up from Brisbane to witness my humiliation and watched the dawn rise with an increasingly overwhelming feeling of “Now what?”


I took the boat to Townsville and anchored in Horeshoe Bay, Magnetic Island while I contemplated "Now What". A fantastic place to convalesce , I met some very supportive people and had a ball for a few weeks. I also caught up with some Friends of Long Standing, (at my age I avoid the word Old) and life started to look a little rosey again.

However the season was kicking on. Dreamagic's insurance doesn't cover being North of Bundaberg in cyclone season so time to go south. I was advertising for crew and managed to entice a delightful Swedish woman to help me bring Dreamagic back to Moreton Bay. Amongst other things she taught me the word  “Kalsarikanni” which literally means “drinking at home alone in your underwear". I don't know much Finnish but I had a feeling that was going to be a handy word to know.

For the past 3 months Dreamagic has been on a mooring or at anchor getting prepped to do the cruise this season, but sans any BOTHing. I had organised a crew, the boat was booked in for her annual week at the spa where she would be pampered, titivated and large amounts of money spent getting her ready for her season, and I could not wait. This was going to be all the good stuff from last year, but without the batshit crazy. Then COViD-19 arrived.


So because some Chinese that I have never met thought eating a pangolin would increase his libido, I am reduced to self isolation. I go ashore twice a day to exercise Bob, and to the market twice a week for groceries. I wouldn't mind, well I would but I have already been self isolating for the past 3 months and I am a bit over it. I was really looking forward to getting out there amongst my tribe of cruisers and having a ball.  Sundowners on the beach, strumming guitars , telling stories that get longer as the shadows increase their length. And now I am reduced to sitting in the cockpit of Dreamagic serenading Bob the Dog and practicing Kalsarikanni. Well Fuk Yew, or whatever your name is, because of your questionable dietary habits I am not going sailing, or perhaps even surviving 2020. Thanks a lot!