We have finally departed. We slipped our lines, again, said our Goodbyes to our neighbours, again, and left the marina. We have probably not been the best neighbours to have had but I hope we were the funniest.
The trip to Keppel is short and easy. Straight across the bay for about 90 minutes. We anchored off Svensons which has a very small eco lodge on it in company with a couple of yachts already there. Dreamagic’s sounder has decided to sulk and would not give me a reading. As with people  have found the best thing to do in this instance is ignore it.


It will realize eventually that I don’t care and start to behave.

Dinghy launched we went ashore to explore. W came across a quite elaborate bush camp that someone had built on the high water mark complete with marquee, fire pit, seating, even a billy. Further down the beach we spoke with a couple of yachties who were trying to temporarily repair an aluminium dinghy with fiberglass. It seems they were the owners of the two other yachts in the bay and they had woken to find the dinghy with outboard had sunk overnight. Naturally we asked if we could help but they had it all under control and we were invited to “Svensons Bar and Grill” for Sundowners that evening. Bring a bottle.
Keppel has beautiful sandy beaches and Rona and Susan  spent a few hours collecting shells while I swam and wandered over to look at the hundreds of Oysters on the rocks at either end of the beach. I don’t care for oysters from tropical waters so we didn’t collect any but there was certainly a good meal for anyone who does. Well at the moment anyway. A developer has bought the lease to the old resort and the council has also granted a lease to a piece of public land, “Lot 21”. The locals do not seem too pleased but a marina will be built, luxury housing around the marina, and then the powers that be will ban anchoring on the beaches siting pollution from boats and ecological damage. So what is now free will cost $60 per night and instead of digging up a bit of sand with your anchor which is replaced at the next tide, we can tie up to concrete secured by piles to the ocean bed and we can all deposit our combined waste into a small harbor. Still I am sure it makes sense to someone.
We spent the afternoon on the boat and about 4’ish went back to the beach. Peter Emerson, one of the yachties we had met earlier had beaten us there and got the fire going to deter the bitey things. What an interesting guy he is! Used to be a truckie but now lives simply on his boat. A tragic story is that until 2 days ago he had an 18 year old companion cat with him on his travels but the cat fell overboard in a storm. His boat is a work in progress. Until recently it had no engine because the starter motor had failed and he no way of sailing because the furler had jammed. However the good news is that a replacement starter has been fitted so he can start the engine. He cant take it anywhere because if he puts it into gear the shaft seal leaks at an horrendous rate but he can use the engine as a gen set to charge his batteries. He’s getting there! We shared stories, swapped Facebook pages and finally said our goodbyes as we were leaving early in the morning.
Peter it was a pleasure to meet you and I hope we can do it again soon.

The following day dawned crisp and bright and we got underway for the short journey around to the other side of the island where Susan would catch the ferry back to the mainland and eventually home. Anchor up, instruments on and I was pleased to see that the sounder had decided to join us this morning. I was not so pleased to see that, like a child that ahs to own up to something, The sounder was telling me that  it was absolute low tide, and the clearance under my keel was less than 10 cms. You wait ‘til I get you home! 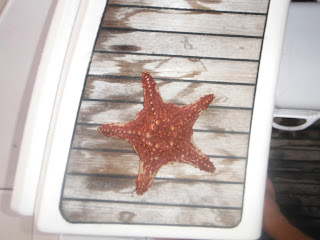 We anchored off the main beach, had breakfast in the resort restaurant which is the only thing open, found starfish on the shore, and generally whiled away the time until 2.30 when the ferry took Susan  over the horizon and out of our lives. I don’t necessarily recommend taking another girl on your honeymoon for every couple, especially one you met for the first time on your wedding day, but if you did want to take one, Susan would be the pick.  We’ll see you at that famous coffee shop/deli  in Trinity Beach. You know the one.
Now down to just two on our honeymoon we spent the rest of the afternoon  on the boat before having dinner and retiring. Tomorrow we start our push North.