Pearl Bay is, in my opinion the prettiest anchorage on the Queensland coast. The approach looks like sailing straight into the hills until it suddenly opens to reveal a beautiful, protected bay with golden sand all around. The island which hides the bay protects you from any wind with a south or east in it and the wave action is negligible. A must stay for anyone travelling up the coast.
We left Keppel reasonably early with absolutely no wind. This was to continue all day, the sea being so flat one could barefoot waterski on it. We made Pearl Bay just before sunup. In the past we have headed from Pearl Bay to Middle Percy Island. This Island has an A Frame home built by the Andrew, the original tenant of the island as a place for yachties to gather. The tradition is to leave something from your boat behind and there is an assortment of things accumulated over the years including old navigation gear, crockery, signage and a collection of various items of intimate apparel. Every square inch of the two floor structure is covered and it is a must do visit. However Dreamagic has visited it three times and what it does not have is a comfortable anchorage. The swell makes you feel like you are trying to sleep in a washing machine so we opted for Hunter Island instead.
Pearl Bay to Hunter Island
Hunter is in the Duke Island group and according to Alan Lucas, the author of Cruising the Coral Coast its “South West headland provides remarkable shelter.”  No it doesn't  Well, not unless you want to drop anchor a mile from the nearest coastline. We found Marble Island the better bet and we also found the plotter charts to be inaccurate here as there is actually deep water virtually up to the beach. There is a homestead at the far end of the beach which according to Lucas is a cattle station. We were considering the financial sense of shipping cattle from here , which does not appear to have a dock when a very expensive sea plane landed in the bay behind us. 20 minutes later another joined it.  We took the dinghy ashore to collect shells and stretch our legs, but the large signs erected on the beach made it clear that visitors were not welcome. Maybe they fly the cattle in and out one at a time. Or maybe they are doing something else now.
Hunter to Curlew island.
This morning was clear and windless so we motored to Curlew Island, which is in the Guardfish Cluster. Again, according to Lucas there is an anchorage to the north of the Island but we didn’t like the look of it at all. As the wind was very light we anchored in a delightful bay to the south in about 10 meters of water. One has to be very careful anchoring here as tides have a 4 metre variance between high and low which can make for a bump in the night if you are in too  close. Our intention was to stay here a couple of nights but without a forecast and with ominous dark clouds building we made the decision to head for Mackay the next day.
Curlew to Mackay 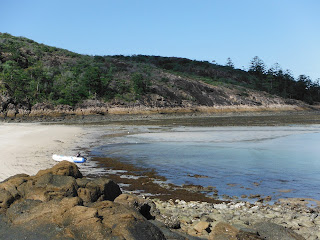