After some dreadful days weatherwise, Good Friday broke clear, blue and windless. Chris Dauth and his son Shaun had joined Dreamagic last night and after fuelling and watering we all went for pizza. Shaun is 14 and with two sisters I think he enjoyed a “Boys Night” out.

Rona and Robert Callway joined the boat at about seven and we motored across the bay to watch the start of the 2011 to . The fleet numbered 45 this year and were divided between some of the fastest yachts in and some older cruisers that Dreamagic could have cleaned up. Very different from when we did it in 2009 and with the weather gods obviously asleep it was going to be a very pleasant, if slow trip up.

The fleet may have been 45, but the spectator fleet was hundreds. We kept a dutiful distance from the start, motor sailed over the line behind the last boat, set our sails and proceeded to climb up through the fleet.

As the fleet rounded the first turning mark we carried on across the bay, sneaking through Skirmish point and following the coastline to Mooloolaba. I had expected to catch the leaders as they came back across the bay but the wind was so light that they were miles behind us. We motor sailed to Mooloolaba in perfect conditions, watching a beautiful sunset before arriving at the Wharf marina about 7.00pm. Chris's wife Evelyn and daughters Caitlin and Rosie joined us for pizza before retiring. 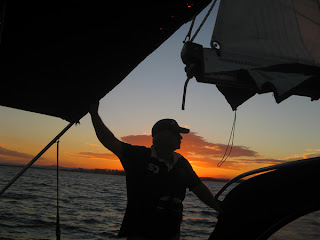