27th January 2011
Thirsty Sound
Australian Mainland
03.00 What the bloody hell was that? Dreamagic started rolling like your knickers in the spin cycle. A meerkat check out of the forward hatch showed that the sea was now coming into the bay from abeam and Dreamagic didn’t like it at all. The wind had picked up too and last nights’ washing up was now on the galley floor, together with anything else that wanted a go at bungy jumping from a flat surface. We did our now traditional nude dance around the boat looking for anything that could damage more than it had before making an executive decision that what had fallen could fall no more, and what hadn’t fallen was unlikely to. It can wait until the morning.
04.30 What the hell is this? Rain is now coming in through the forward hatch, which means it is also coming in through every other hatch in the boat. Take your partners please for the naked waltz through the boat frantically shutting hatches, thereby turning the boat into the worlds only floating sauna.
05.00 Bugger it! We got up, opened the hatches and started the motor. The weather was clear, but the wind was gusting 20 knts. Up anchor and head out for somewhere south. With the wind blowing from SE the chart showed that the were sort of on the way. However Alan Lucas’s cruising guide said that all were poor anchorages except , 24 nms away. We called Thirsty Sound VMR and gave them our intentions.
By midday we were there, and at first glance they did look unfriendly. Thirsty Sound was only 12 nms further away and was guaranteed a flat sea if little protection from the prevailing wind. We started to cross the aptly named towards what the guide said was “Should not be attempted by the inexperienced Sailor”.
Half way across my depth sounder, a usually reliable instrument decided to only read from 20 metres down. As we were in 3.5 metres, and our keel hangs 2 metres under the boat, it certainly knows how to pick its moment. I pleaded with it, offered it a pay rise, improved working conditions, whatever but it steadfastly refused to work. Maybe it was frightened. I know I was.
We came round sandbars, and over unseen humps using C Map, Charts and more luck than judgement until we  finally got to . Here there is a rock aptly named “Narrows Rock”. The entry from Alan Lucas’s Cruising the would help illustrate here:
“ Sea and  swell will diminish considerably by the time the narrow entrance is encountered. This is advantageous because by then some anxiety will be felt about the exact location of Narrows Rock. This is impossible to see except, perhaps at low springs. Missing it is guesswork alone…”
Work you bugger! The sounder just sat smugly on 20 metres. I resorted to reading the charts on the saloon table, watching the plotter on this PC but with no view of what is going on outside, shouting “10 Left” or “17 Right” to Rona who, gallantly on the helm was trying to understand how the boat was supposed to go across rather than around a reef clearly just in front of us.
Obviously we made it, or I would not be writing this. Still in very shallow water, but sand rather than rock we cautiously made our way up the protected inlet to an anchorage. Protected by having no water certainly, but the surrounding hills are very low lying, the wind is blowing oysters off the rocks and we circumnavigated the entire island before finding a home about 200 metres from the bank, just inside the mouth of the other, easier to navigate channel back out to sea.
About this time the sounder, realising it was being ignored, came back to life. We anchored on the low tide at about 4.7 metres, soon to become a whopping 11 metres as the flood raced around the island. The water was running so fast that although we were anchored the paddle wheel which registers how fast we are going shows 3 knots. A curiosity of the English language is that a yacht that is fast is either quick, or attached to the bottom. Right now we are both.
I called VMR Thirsty Sound to log off and we got a weather report for tomorrow. More of the same, getting worse. I just love this sailing. It would be great if we could just get the bloody things up!
Apparently Captain Cook brought the Endeavour in here thinking it was a river. He wanted to get water and careen his hull, (Ground the boat so that he could clean the hull). Finding that it was just an island he did neither. I am proud to say that I did careen.
At 22.00 I heard a noise that sounded like something sliding across the cabin sole. I awoke to find that Dreamagic was heeling at an angle of about 45 degrees. We were aground and being laid down very quickly albeit very gently onto a sandbank. Examination of the smug sounder showed 5.3 meters under the keel which was ridiculous given I had less than a metre under my pillow, which was now resting on the hull! We checked the boat, closed the sea cocks, stowed anything else that wanted to go for a midnight walk and went back to sleeping on the inside of the now horizontal hull. Well, what else could you do?
﻿﻿ ﻿﻿ 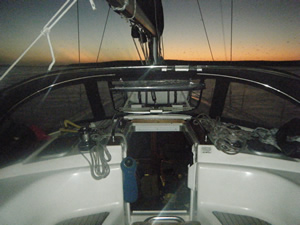