26th January 2011
Middle Percy
We woke to another sunny, cloudless day. The anchorage had been quite rolly but after a week on dry land it was good to be back on the boat.
We left Digby at about 06.30 and motored to Middle Percy, some 26 nms away.As it is Australia Day we flew the Red Ensign as a mark of respect. The wind was reasonable, but as always right on the bow. We motored into the lagoon and set anchor at about 11.00am.
Dreamagic has been to Middle Percy before. It is somewhat of a Mecca for cruising yachts thanks to Andrew Martin who got a lease for the island in the sixties and decided to cater for yachties. He built an A Frame shelter with palm trees and a BBQ. Yachts that come here usually leave some token of their visit and having left a plate in 2009, I decided that one of the Louisiades wooden plates we were given, suitably inscribed would suit.
The plate read “Dreamagic. Capt’n Willi Cinque, 2009 Linda and Jenny, 2011 Rona” which included the last visit. We inflated the dinghy and fitted the outboard, and went ashore. I think Rona was impressed with the place but a search did not reveal our original plate. We mounted the new one and looked around for memorabilia of any other yachts we might know. Let’s Go, from the Louisiades Rally was there but no one else we recognised. A swim off the beach and back to Dreamagic.
Unfortunately I have a slight eye infection, so my eye keeps watering and with my nose running in sympathy life is painful. I considered wearing a patch but with my four day growth beard I would look too much like a pirate. I went to sleep for a hour which seemed to fix it but an hour after we got back to the boat it was as bad as ever. Consequently I didn’t see the two juvenile hammerhead sharks which came to the back of the boat to check out the potato peelings we ditched, (although I did see the biggest turtle I have ever encountered swim slowly by).
Dinner was a copy of Isabelle’s recipe of pork in a batter of parmesan and egg with beans and potato. We watched yet another bloody red sunset over a group of tropical islands before an early night. I did however see a shooting start and made a wish. 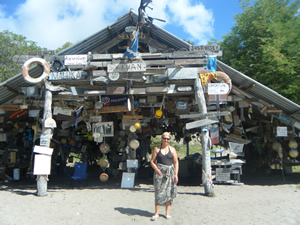 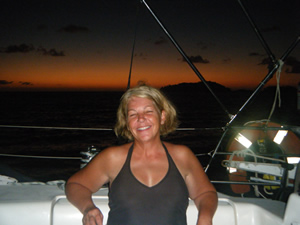 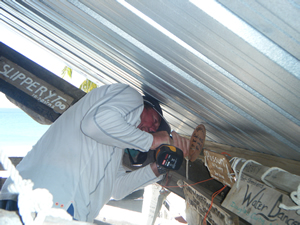 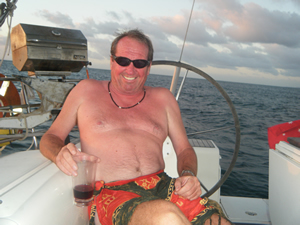