Day 4 The Fantome of the Opera 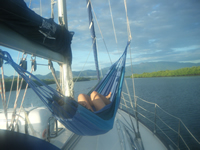 Last night was very hot and sticky. Consequently most of the crew were up to see a beautiful sunrise over Hinchinbrook. This place really has amazing beauty and has a real calming effect on the soul.
That is until Isobelle dropped a pillow from her hammock over the side and had to be restrained from diving for it. The place is full of crocodiles and fortunately we persuaded her to take the rubber ducky instead.
(Sailing Note: Crocodiles don’t eat rubber duckies. It makes them fart. Capt’n Willi) 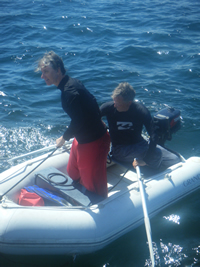 All safe on board, including a decent size fish that committed suicide by jumping in the dinghy last night, we had breakfast before making the journey to the Lucinda Jetty. The water here is very shallow in parts and although we have chosen high tide to make the crossing it is still quite technical. This is when I noticed that CMap has it’s vagaries. At Dunk it showed we were about 100 metres up the beach, here it is constantly to starboard of where we actually are. Very strange. Still we managed the crossing and at about 11.00 we were back in the motoring south in beautiful sunshine, and no wind.
Between Fantome island and there is a wide protected bay. We anchored near the coral and settled down to a late lunch. The outboard is still playing up so the crew swam in while I tried to fix the problem. It seems that the carburettor has come loose from the block and petrol is seeping through the  joint. I tightened that and it now seems to work. I hope so! I am having a run of bad luck with the boat at the moment and all manner of small things seem to require attention.
Dinner was a Massaman curry, while watching the lightening from storm cells over the mainland. Finally one hit us but rather than run for cover we put “The Soggy Bottom Boys” on the stereo and sat and enjoyed the coolness of the rain.

Pictured is Claire and Christian performing a "Happy Dance" while it is p^ssing down. Must be French thing, but it was hilarious! thanks Guys! 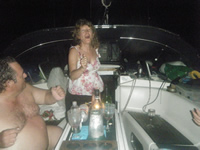 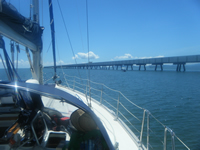