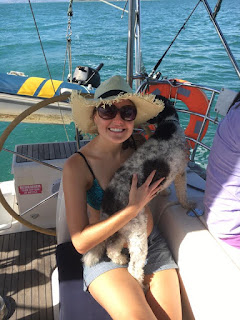 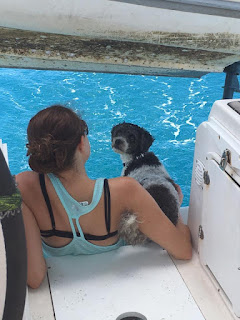 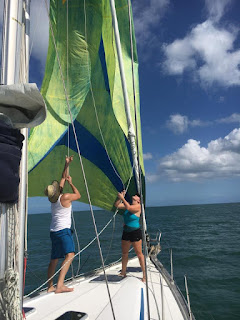 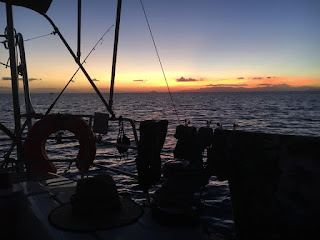 Should crew be asked to contribute to the cost of sailing? 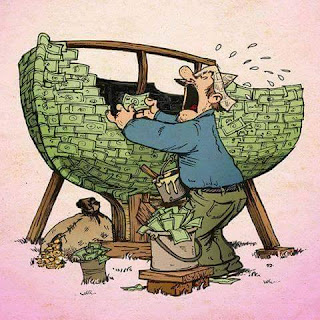 The law says that a private boat cannot be used for charter. In Queensland it falls to Maritime Services Queensland to enforce this, and quite rightly they do. However, I asked them about whether making a contribution to costs is OK, and it is, providing it is reasonable. Insurance is another consideration and Dreamagic is not insured unless being used privately. I called my insurers regarding crew making contributions to cost and they are quite happy with that, under the same provision as MSQ.

So it becomes a moral decision. Some skippers want to shoulder the costs themselves, and that is their prerogative. Whether they feel some nobility in this action, or whether they feel that gives them more control over their crew I don’t know but it is their generous choice.

Some boat owners find the financial burden hard to carry, or feel it is unfair.  I admit I am one of these. I know how much boats cost and have no problem in contributing on the odd times I am a guest on someone else’s boat. I think the last time I did that was at the CYC Ladies Day Race in 2014, I was on an Adams 10 and I think it cost me $25. On DM I charge between $10 and $25 per day depending on what is happening, where we are going, how much fuel we will burn, and what provisions Dreamagic is expected to provide.

I don’t think there is anything wrong with this but some skippers, some crew and some clubs find this offensive. Some crew feel that they should not be asked to contribute either financially or in terms of time to prepare the boat. If your name is Dennis Connor, Jessica Watson or James Spithill I can probably see your point. If it isn’t, then another boat will probably suit you better. Some skippers get quite irate at the thought of someone collecting some money from their crew to use the boat. My view is simple. The boat cost $200,000. The weekly maintenance and parking of it is about $650 a week, so if I get $100 back, so what? Everyone has had a good time, and my crew are not complaining because they know I am still heavily subsidizing their day out. So try as I might, I do not understand the venom spat by other boat owners. Surely we all run our boats as we individually think fit.
And if you are a boat owner and reading this, and you think that some financial help would be handy, make sure you check with your Yacht Club before implementing it. With an attitude that would be the envy of Malcom Turnbull, some Yacht Clubs feel that while they have the right to charge people to sail on your boat. You don’t.  And for some clubs it’s serious. Very serious actually. More serious than say, starting a fight in a resort owned by your biggest sponsor. Even more serious than say, starting a fight in another Yacht Club that is having a Charity event. They are misdemeanours compared to breaking this unspoken law. And the penalty is harsh. Firstly, you will not be allowed to use the club wharf for 6 months UNLESS you are picking up and dropping off people who have paid the club to sail on a boat you have provided for free. That clearly has come straight out of the Liberal Party room, but if that is the punishment, then so be it. Suck it up.

But wait there is more.

Additionally, you will not be allowed to use the amenities block for 3 months and must surrender your key immediately, (presumably to replace the 8 lost in the past three months). Now you see how serious this transgression is? The most serious penalty that can be handed down bar hanging, (and actually that may have been kinder). You will not be allowed to go to the toilet for three months. Now that is hard to suck up. Its inhumane.  Even the Nazis didn’t think of that.  And I am 62. I don’t think I can still hold it that long.

So, you have been warned.


This script is copyright, all rights reserved. John Cleese is currently considering using it for his sequel to Fawlty Towers.
No comments: