Day 23 Then there was light.

We woke up to no power on the boat. Consequentally we could not get news of what had happened when TC Yasi had crossed the coast. Gradually, through mobile phone, sms and internet we got a picture of a very relieved Cairns that had missed the worst of the storm. Not so lucky, Innisfail and Cardwell. Port Hinchinbrook, where we were only two weeks ago had been destroyed. 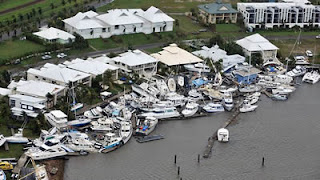 While Richard shot off to volunteer for the SES we surveyed the damage to Dreamagic. The fire had licked the corner of one of the batteries and the insulation had melted on some of the smaller wires. Of more concern I had turned the battery kill switch off when the fire first started and that could not be turned back on. Consequentally we had no power to anything on the boat. The fridge and freezer were of most concern as they were thawing with our provisions for the next leg of the journey.
Richard came back at about 10.30 and we started to strip the electrical system. The switch is sited beneath the navigation table and defied all logical ways to get it apart. Bloody Germans! Finally we had to work one handed through a small aperture at arms length on a switch that was wood screwed to the inside of an inaccessible panel. Well done Richard for your patience with this.

Having finally got the switch out it was apparent that the amperage going across the switch had welded it shut. I suppose we were lucky that the fire hadn't started there as it would have been difficult to access. The next problem was to obtain another switch but that turned out to be a stock item at the local chandlers. Once fitted we connected the alternator and a test showed all was working well. We have lights!

In the afternoon Rona managed to get the courtesy car yet again and went to secure some torch batteries. Because of the recent floods here, followed by the threat of Cyclone Yasi these proved quite elusive but finally we got enough spares.

In the evening we wandered over to the Capricornia Yacht Club for aperitifs before returning to Dreamagic for a dinner of fresh prawns. We were now getting images of Yasi and Cairns was very lucky.All the friends we spoke to were fine and humour was creeping back into some of the messages and texts. We do know people with holiday homes in Mission Beach and Tully. These areas were badly hit and we don't know what has happened there.

With everything that has been going on we were unbelievably tired and an early night was definately called for.