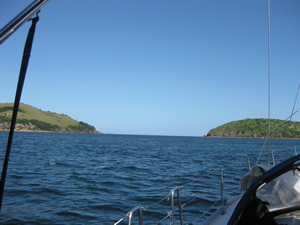 What a beautiful day!  Not a cloud in the sky and quite still. We checked BOM and TC Anthony has turned back on his track and is heading north but turning into a low. He is still of some concern but you would not know it looking at the weather here. We got Dreamagic ready for sea, stowing all the items that are lose and locking all the cupboards and hatches before moving around to the fuel wharf and refuelling. We were a little early so we had coffee before facing the wrath of miss miserable the girl at the marina who told us we could get fuel by pressing the green button after she unlocked the bowser, which she will get around to doing soon.
However even she could not mar this day as we motored out of the leads towards some 42 nms away. The wind filled in to about 12 knots but of course from where we were going. We did manage the jib which gave us an extra knot or so and we scampered through over 30 bulk carriers waiting to load at Hay Point before settling down to the journey. I suppose this is one of the consequences of the recent floods disrupting the mine operations but there is an awful lot of money sitting idle there.
is in a group of three, including and . They form a natural but very shallow bay with over a 4 metre tide so anchoring takes more concentration then usual. Once down the Sun took it’s toll and a dip was in order. There is no one here! This is the first time we have had no one on the boat, and there is certainly no one on the shore on these uninhabited islands so for me at least skinny dipping was the order of the day. After all, I was born in water and without clothes.
Dreamagic has been to Digby before. During her delivery I came in here with Linda and Jennie as crew. This time the weather was more favourable and we had a very quiet evening eating Tacos and drinking an unfortunately very sweet red wine which was bought by mistake when we provisioned. Still, only another 11 bottles to go. If this is cruising with your partner I can see what the appeal is. We watched a glorious sunset sitting around the boat in sarongs before retiring early. 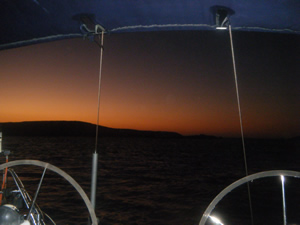