11th  January 2011
Nara Inlet, Whitsundays
Day 9
One
The day started very overcast. We heard via an sms that there had been a flash flood in Toowoomba and 8 people had died. The was on flood alert and the Brisbane CBD had been evacuated. Here in our world we are far removed from all this and it is hard to appreciate what is happening outside.
A storm cell started to come over us so we weighed anchor and tried to outrun it. No such luck and the breakfast of egg and bacon was eaten in the rain while the crew sat below tucking into theirs. It was possible to steer round subsequent cells so once we had some sea room the rest of the course to Nara Inlet was relatively dry.
About 4 miles off Nara Inlet we got wind! 10 knots, slightly off the bow so we hoisted sail, killed the motor and sailed down the Whitsunday Passage for a while before tacking for the entrance. Sailing at last! We played suitable sailing music, Christopher Cross, Little River band, Crosby Stills Nash and of course Jimmy Buffett. Lunch was lamb and oregano wraps an the world looked a lot better as we cleared the reef into .
Nara Inlet is one of my Favourite Harbours In The World. There ae only a few of them but this one is right up there. A long fiord like channel with absolutely still water and an abundance of wildlife. I have been here many times and really connect with the place for some reason.
We anchored at the head of the inlet and while the  others took the dinghy to see the and the fresh water fall, I just sat on Dreamagic and soaked up the ambiance of the surroundings.
We shared the inlet with about a dozen other yachts, mostly charters. This is a favourite first night stop for the fleet and I was a little worried that the exuberance of some of the crews first night afloat might ruin the stillness of the night ahead. However such is the power of that the evening fell to no more than the noise of the cockatoos and the wild goats put here by the British to feed shipwrecked sailors many years ago and now flourishing in this paradise. 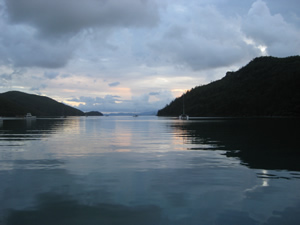 Once dark we sat on the stern, drank wine and watched the phosphorescence in the water. A juvenile shark glided by, its dorsal fin trailing a shower of green magic dust behind it. We flicked the dinghy painter and marvelled at how the tiny green animals scattered across the still, black surface of the water. Some of the creatures got caught in the strands of the painter and it glowed as we put it back in the water. Other than our own music, Italian Opera played very quietly, there were no sounds from other yachts and only the braying of a goat looking for it’s mate in the hills dark above us. A truly memorable night. 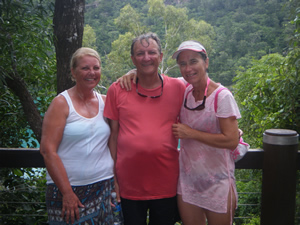 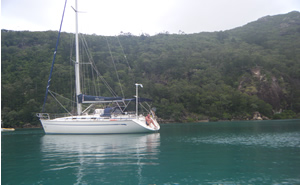 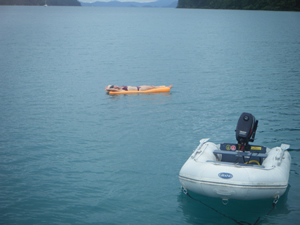 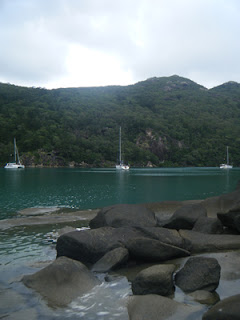